Just how safe is 5G? We have been testing 5G in real life situations to find out.

The company I work for set up a 5G smart apartment earlier this year in a building on Australia’s Gold Coast, which is in the south-east corner of the state of Queensland. The apartment offered stunning views of the sea and sandy beach below, in an area famous for surfing spots and theme parks. But we wanted our volunteer family to stay indoors and max out on 5G devices.

We decided that the best way to test 5G was to allow the parents and their teenage kids to invite family and friends over. We gave them free data and free Wi Fi, as well as 5G devices. The idea was to see what it what would it be like with everything running in in a regular living area. Of course, we had no idea that the COVID-19 pandemic was on the horizon and that this would become the working and living scenario for many people.

We crammed more than 50 electronic devices connected via 5G and 5G powered Wi Fi into the large, two-bedroom apartment. We provided three 5G routers that were all capable of connecting 20 devices each, several smartwatches, nine 4G phones, four 5G phones and even threw some laptops into the mix. We added several Electromagnetic Energy (EME) monitoring stations: one in the living area, a roaming one in the kitchen and another in the media and games room.

When the family of four moved in on the Friday evening, they spent some time getting used to the apartment and using 5G and Wi Fi. We found the highest levels were in the kitchen and living area, where we had placed the main Wi Fi routers that were connected over 5G. The 5G EME levels we picked up were a staggering 100,000 times below the internationally recommended safety limit and the Wi-Fi levels were over 10,000 times below. When the family woke up the next morning, we saw the 5G activity and the Wi Fi activity increase, but similar to the Friday evening, it always stayed well below the safety levels. 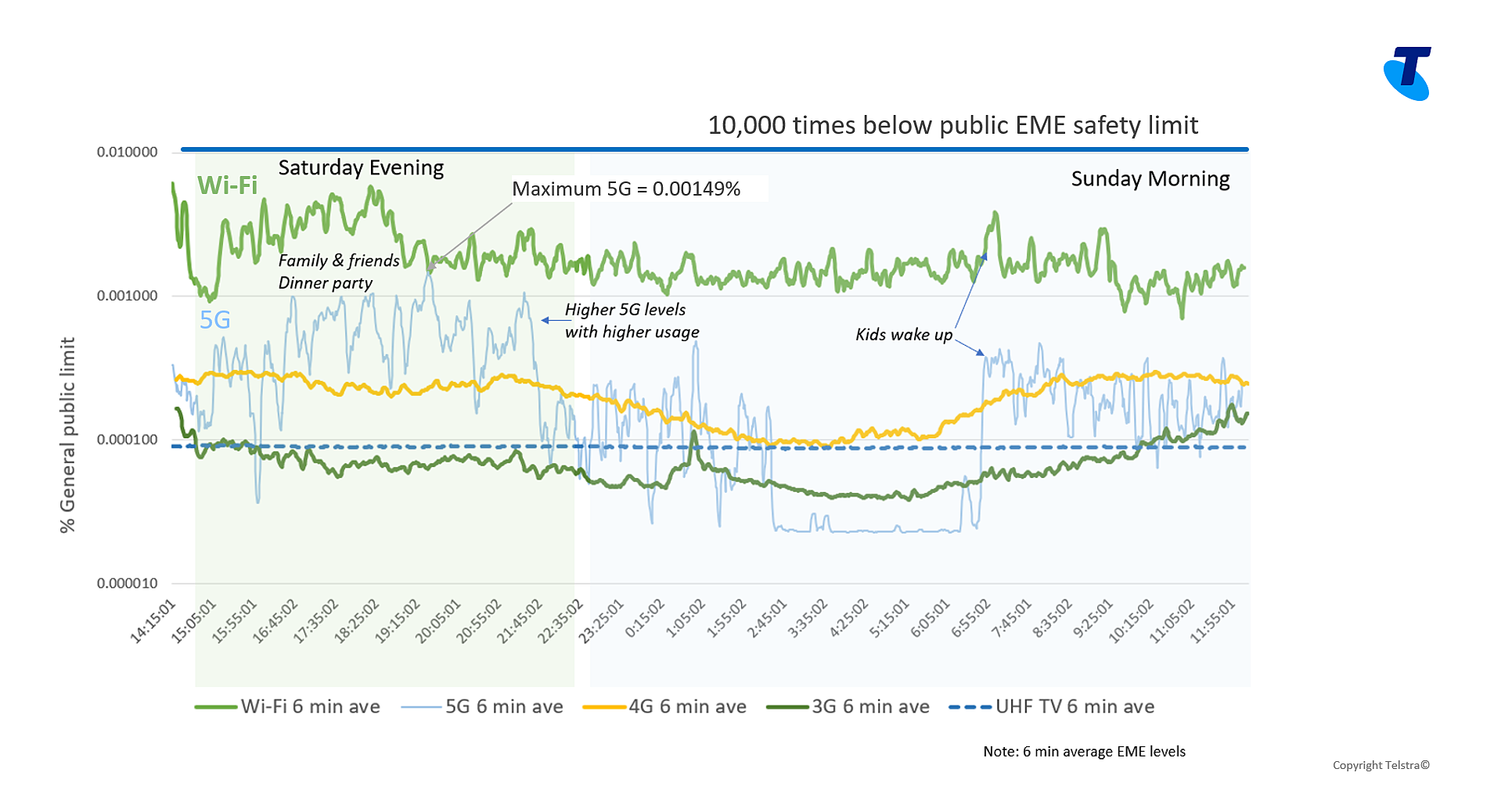 We organized a “maxout challenge” on the Saturday when the teenagers brought their friends over. At the same time, the parents organized a dinner party. What we found was that even though they had family and friends over and their challenge was to use as many devices as they could, whether it was streaming movies, doing speed tests, watching high definition video or gaming, the 5G levels only increased slightly. They always remained very, very low and the highest 5G EME level measured was over 65,000 times below the safety limits.   In fact, the EME levels outside the apartment on the balcony from the local TV broadcast and other mobile services were higher than the EME levels inside the apartment from 5G.

The safety limits we used are the international levels recommended by either the IEEE standards association, or the International Commission for Non-Ionizing Radiation Protection (ICNIRP). The World Health Organization (WHO) recognizes and endorses these recommendations. The IEC develops standards that test to those limits.

The 5G smart apartment EME testing forms part of a trial that is feeding into the important work of the IEC developing updated base station and 5G network testing standards in Technical Committee 106. The important aspect of these trials is testing 5G in real life situations where people are using 5G and many connected devices.

It is worth stressing that it will take some time before we see all the benefits of 5G. At first, it will allow the everyday person to upload and download data much quicker and add more capacity for the growing number of connected devices and user data. But it will take a number of years before enough spectrum is available to make it super-fast with very low latency. When that happens, it will facilitate automated self-driving vehicles, as well as making motorways and other transport systems safer. It will have a tremendous impact on digital health, enabling remote surgery and remote medical applications. These are only examples of what this exciting technology is going to deliver.

Mike Wood has been heavily involved in the roll-out of 5G in Australia in his capacity as Principal for EME Strategy, Governance and Risk Management at Telstra. He also chairs IEC Technical Committee 106, which deals with safety testing standards for mobile devices, base stations and wireless communications systems.